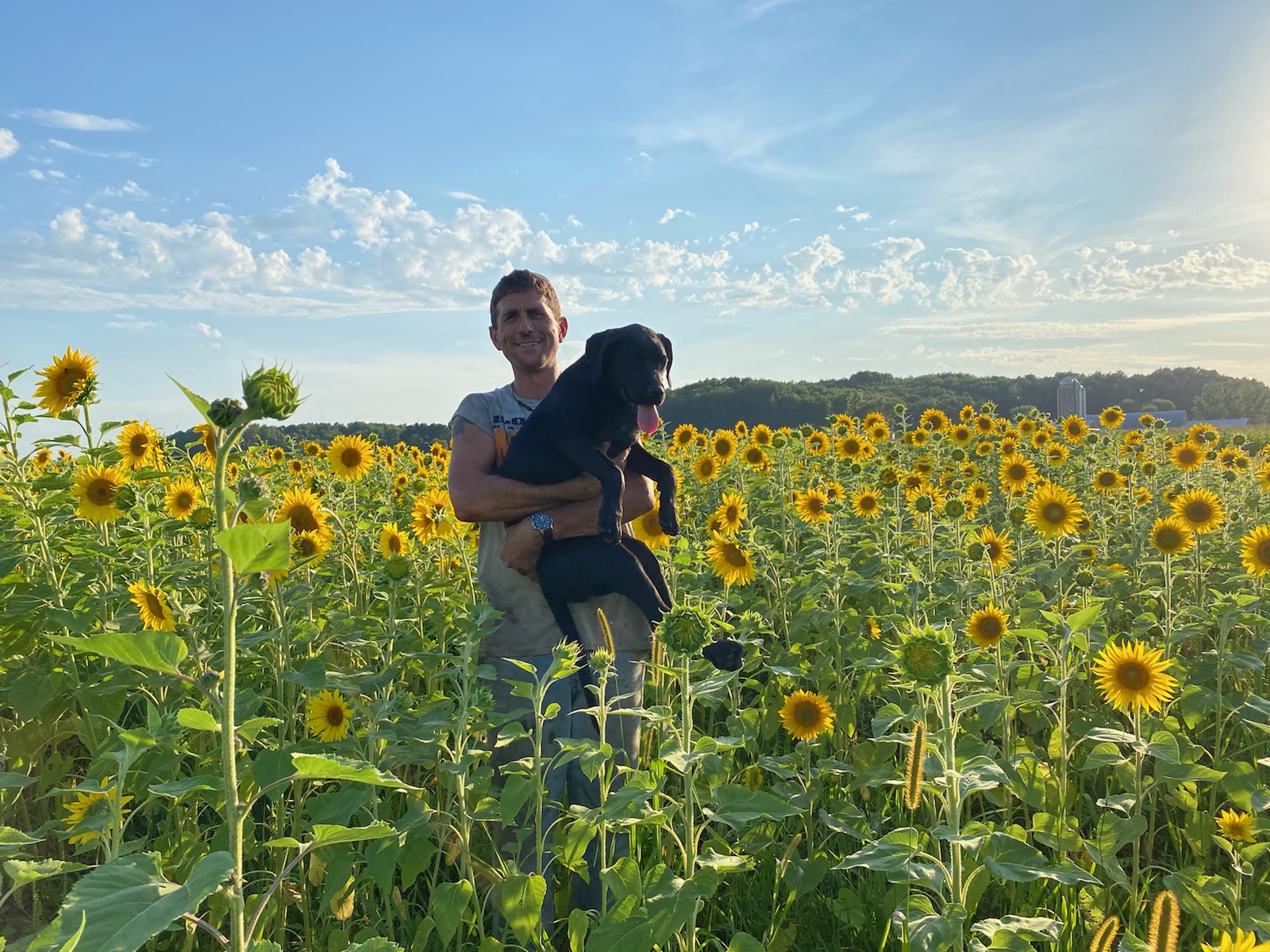 Through the Contract for Change grant, the CCOF Foundation allocated more than $500,000 to non-organic farmers in the United States, many from socioeconomically disadvantaged backgrounds, to support their transition to USDA organic practices. Jared was one such grant recipient, and we checked in with him nearly two years after the grant. While the virtual world has its drawbacks when it comes to hosting events, it's proven to be the most effective medium for connecting farmers with our CCOF community in the past few years. Here are a few highlights from the Zoom conversation between CCOF Chief Program Officer Jessy Beckett Parr and Jared Siverling. Stay up to date with our current Organic Transition programming at our website.

Jared is calling in from Siverling Centennial Farm in Bloomer, Wisconsin. Jared, could you tell us about your family’s farming background?

My dad was a big Gary Zimmer Midwest BioAg guy in the 80s and 90s. Our soil tests were good back in the day; they are great now. Dad was borderline organic with no synthetic fertilizers and no GMOs, but he did use herbicides from time to time. That was the last step. We’ve been certified organic since 2019. This year, we will have the last 25 acres of our 500 acres certified organic, 100 percent.

We grow about a dozen crops—hay, alfalfa-based hay, corn, and soybeans. We also have sweet corn; we grow a lot of open-pollinated corn. We’re getting out of the soybean business, but I do fight with a few acres every year still. We do an 11-way chicken feed mix that includes different varieties of wheat, oats, barley, some peas, radish, canola, lentils, fava beans. We grow a lot of rye. Cereal rye grows really well up this far north. Last year we extended our beef herd from 6 critters to 61 critters. My wife does an organic CSA from our no-till organic-dedicated garden, which supports about two dozen folks. My wife still works off the farm full time. Our goal is to have her working here full time within the next five years. As of last year, I left my full-time military gig. I still proudly serve in the Wisconsin National Guard, but I’m trimming it back to one weekend a month after about a decade of working full time.

Thank you. I love hearing about what you’re growing because the list is so long and so diverse. I’m curious if you can tell me about when you knew you wanted to farm. It’s a big deal, choosing organic farming as a life path.

The first farming book I remember reading was Gary Zimmer’s Advancing Biological Farming. My dad mailed it to me as a birthday present over in Iraq, and I realized all the [truth] he was talking about.

For context, I was a commercial sprayer (herbicides) for my college job in summers. It was a really great-paying job in the early 2000s. At that time, I was also in the Army. I was in fairly good shape. I was fairly healthy, but I noticed that the summers that I was spraying crops I always had the sniffles. The other nine months out of the year I felt great, except in my summer months. I think it was the sprays. I don’t have any scientific documents to back that up, but for three straight summers I had the sniffles and a hacking cough, and I think it was the herbicides.

Gary’s book and a lot of subsequent other books, including Bob Quinn’s book (my dad’s favorite book about farming), was part of me surveying all this organic farming literature. In the Midwest farming community, the idea is so entrenched that you have to have the chemicals. You have to have the sprays. You have to have the synthetic fertilizers. Saying that you’re going to farm without any of those is like saying, “Just flap your arms really hard and you’ll achieve flight!”

I got convinced to go organic pretty early on. In 2011, my dad gave me the back 20 acres of the farm that no one could see, and he said, “Jared, go nuts.” I started trials with organic-compliant farming. I was raising corn and soybeans without any herbicides and without any inputs except manure. I learned a lot in those seven or eight years. I learned a whole lot about what to do and what not do to; learned a lot about tillage. When we transitioned in 2019, I came at it from a place of having some comfort. It wasn’t like one day we just sold the sprayer and went cold turkey organic.

I appreciate you calling out at the very beginning that you had support from your parents. What happened with those first 20 acres? What did you grow?

I, like a lot of folks, started by removing the sprays. We never used synthetic soil; that was not a factor. We had a lot of dairy manure, so I tried to make up for the sprays by getting really good at using a lot of tillage tools for weed management (rotary hoes, cultivators). I have, like, 13 different cultivators, different time weeders, different tools. I was then going to substitute in tillage, but I missed the systems approach. My opinion is that the continuous corn and soybean systems or the continuous wheat systems in the Midwest are broken systems.
When I got into our current system, which is more of a small grain, clover, corn system, I learned you don’t have a lot of weed issues when you have a more diverse rotation. We have so much less tillage now than when I first started taking over. I’m kind of embarrassed to admit that [on] the other piece of land, I had probably eight different tillage passes. I was trying to grow perfect, weed-free soybeans, and that’s not the goal. The weed is not an enemy, it’s a plant and a place. It's growing because you probably did something to cause it to grow. That takes a lot of learning, and it’s a fantastic paradigm shift.

It’s a total paradigm shift. There’s a lot of pride in agricultural communities about how weed-free you can keep things, and we’re going to have to bust that open if we’re not going to have people experience shame when transitioning to organic. Shame is not a way that anybody learns; it’s a way to shut down learning. When you start to ask the right questions, people come to their own solutions. At CCOF, we focus on uplifting positive solutions, because solutions exist, and diversity is one of those solutions.

I’m curious if we could take a left turn into economics. When we were preparing for this call, we had a long conversation around how you economically transitioned the farm. That's something that doesn’t get looked at a lot in the beginner farmer story. Some assume, “fourth-generation family farmer, you got the land, you’re up a leg.” But I'd love for you to tell your full economic picture, as much as you are comfortable sharing, because that’s really helpful for those of us on the call who are supporting folks trying to get into ag.

My father and mother bought the farm at market value in the 1980s, and my wife and I bought it at nearly market value in 2019. My parents did discount us some, but we bought the farm. We have about $350,000 worth of machinery, and we’ve paid tax for all of that. We operate with zero operating loans. There are no loans on any machinery. The only debt on our operation is the actual land itself, and we’ve got that about 50 percent paid off.

We grew up quite poor. We had a bountiful garden; we had dairy cows; we had fresh milk. We did not grow up hungry, but we didn’t have a lot of money. My parents were paying 80s interest rates on a zero-down farm. My dad had a tractor at one point with an 18 percent interest rate. Can you imagine paying 18 percent on anything?

I did multiple mobilizations with the National Guard. I was working full time. My wife, the attorney, paid off her student loans. We saved a pile of money. A lot of my farm learning did not occur from 8 to 5, Monday through Friday. That's when I was working. A lot of my farm learning was very early in the morning. There were times when I'd work a full day's work, come back, and I'd be on the tractor until 2 a.m. I'd get a couple hours of sleep, and it’s not fun, but they teach you how to do that in the Army. That's why God created coffee.

If people are passionate about farming and you are looking at taking over a family operation, don’t quit your day job. Start from a basis of stability because, especially [for] those looking to go organic, there’s going to be some bumps and bruises along the way. You're not going to get it perfect right on, no matter how many YouTube videos you watch, no matter how many John Kemp videos you watch or how many books you read—you’re not going to get it perfect. Have that security blanket because just diving into this with nothing down 100 percent financing—it doesn’t always work. It's like starting a band or opening a restaurant; you can make it work, but it’s a risk.

My wife is an economics major with a law degree. I have an engineering degree and my master’s in mathematics. Neither one of us has an agriculture degree. I joke sometimes that I'm glad I don’t—I think I might have had some bad habits to break.

Quotes have been abbreviated for this blog post. If you’d like a recording of the full conversation, please email ccoffoundation@ccof.org.